Aussie vendor EnterTheMatrix had a simple and effective business model.  Purchase Australia’s most popular party drugs from overseas vendors on Silk Road, add a 400% markup and resell them to Aussie Silk Road customers.  Although there were plenty of grumbles about the prices, those who wanted their drugs quickly (ETM sent by Express Post) and did not want to take the risk of importing via Customs (legal consequences are much harsher when ordering overseas) begrudgingly paid a premium.  After all, it was around the same as street prices and at least the quality of the goods tended to be consistently high.

ETM was a master of self-promotion, building up the business over more than a year, eventually becoming one of the top 1% of Silk Road sellers with over 99% positive feedback.  Despite the high prices, users lavished praise on the service and the quality of the product.  By February 2013, EnterTheMatrix was easily the most successful and trusted Australian vendor on the Road.

That’s when ETM offered a new product – ‘Matrix Secrets! Learn from the Top 1% of SR’ promised to reveal all the tips and tricks necessary to run a Silk Road business safely and profitably.  The price tag – 86 bitcoins, which at current exchange is over $2000 – was too steep for many, but five potential Escobars ponied up with the money.

Then ETM was feeling the love on Valentines Day and announced a sale, offering tempting discounts on their usual prices for MDMA, LSD and other goodies.  Everyone assumed this was in response to a couple of new Aussie vendors who had popped up in recent months, offering similar quality drugs at slightly lower prices.  Orders flooded in for the ‘one day only’ sale, which was soon pushed out to two, then three days by the generous ETM to loyal customers.

A couple of customers expressed surprise that ETM told them that the ‘small print’ of the sale required them to finalise early (release money from escrow) on the cheap products to keep the cash flow going.  They could stay in escrow if they wanted, but they would get the product at the regular prices.  Knowing they were dealing with the top-rated and most highly respected Australian seller on the Road, many customers finalised as requested.

By Friday there were a few pissed off customers – the Express Post hadn’t arrived.  ETM wasn’t responding to messages.  This all sounded very familiar to those who had been on the Road for a year or more.  The MO was identical to that of Tony76, the Canadian seller who pulled off the biggest ripoff in Silk Road’s history in April 2012.

It seems that ETM has decided to retire and go out with a big ‘Fuck You’ bang.  Late last night they added an ASCI up-yours finger made out of number 5 digits (5555 translates to ‘LOL’ in Thai) to their seller’s page. A little later, a quote appeared:  “The game’s out there, and it’s play or get played.  That simple.”  It is one of the most famous quotes from The Wire, by Omar Little, a character known for double-crossing and outsmarting drug dealers. 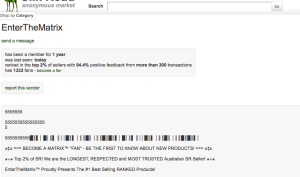 It’s too early to estimate how much Australian customers lost to ETM before the website pulled their listings, but it is certainly well within the tens of thousands of dollars.

Who knows for how long ETM planned the con?  Perhaps they are one of the other Aussie vendors and have already started reselling.  But my guess is that they started planning it very soon after Shadh1 was sentenced to 3.5 years jail for running a far smaller and less professional operation.  Perhaps it hit home that, although business was lucrative, it’s not worth that sort of serious time.

PrevPreviousShadh1 – penalised for not propping up Aussie organised crime?
NextAre there modern-day Gladitorial fights on the Darkweb?Next 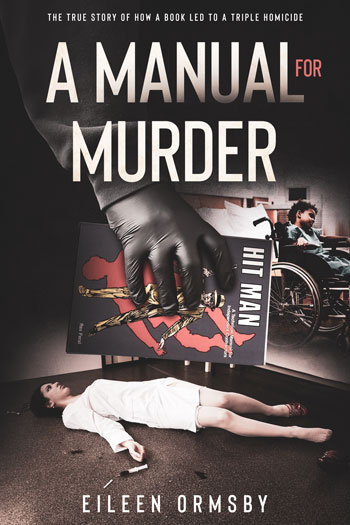 … and receive an exclusive, FREE copy of a true crime story in ebook format.
You can unsubscribe anytime.

The problem with Anonymous

On Friday I wrote an Opinion piece for The Age based on an earlier blog about why I think Australia’s proposed data retention laws are not only an invasion of privacy, they are an expensive measure that simply won’t work.  Today The Age ran a longer journalistic piece about the laws. This prompted a couple of tweets from the Twitter

Behind the Casefiles – Stephen Hilder

Blue Skies, Black Death This is another entry into my series of a behind-the-scenes look at the episodes I write for the podcast Casefile. These posts will explain how and why I choose each case and the research that goes into writing the stories. This post is about Episode 88 – Stephen Hilder. Best to listen to it before reading on,

Another story from the dark web “murder-for-hire” site hack. Read The Curious Case of Besa Mafia first. There are stories of people paying real money, verifiable through the blockchain, that have come out of the hack. Both targets and their would-be killers can be identified, so it’s only fair to leave those to the authorities for now. Meanwhile, in an epic

Got It
Learn more